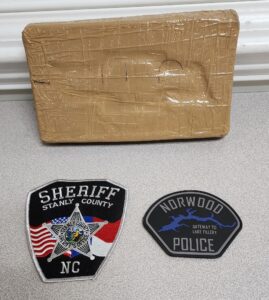 In a continued commitment to combat the opioid epidemic that faces us, the Stanly County Sheriff’s Office and the Norwood Police Dept are continuing a joint investigation, which led to an operation on Monday October 31, 2022 in the northern end of Stanly County. This operation resulted in the arrest of an individual and the seizure of over a kilogram of uncut fentanyl.
This operation resulted in Jeremy Donovan Chisolm, 36 years old from Greensboro NC being taken into custody and 1,022 grams of Fentanyl was seized.
Due to this being uncut fentanyl, it has an approximate street value of $516,000, after being cut to a user level and sold. Per the DEA this is enough Fentanyl to potentially kill 500,000 people.
Chisolm was charged with the following:
Two counts of level 3 trafficking in Opium
Possession with intent to Manufacuture, Sell or Deliver Opium
Maintaining a Vehicle for Controlled Substance
Possession of Drug Paraphernalia
Chisolm has a first appearance of November 14, 2022 and is in the Stanly County Jail under a $1.5 million dollar bond.